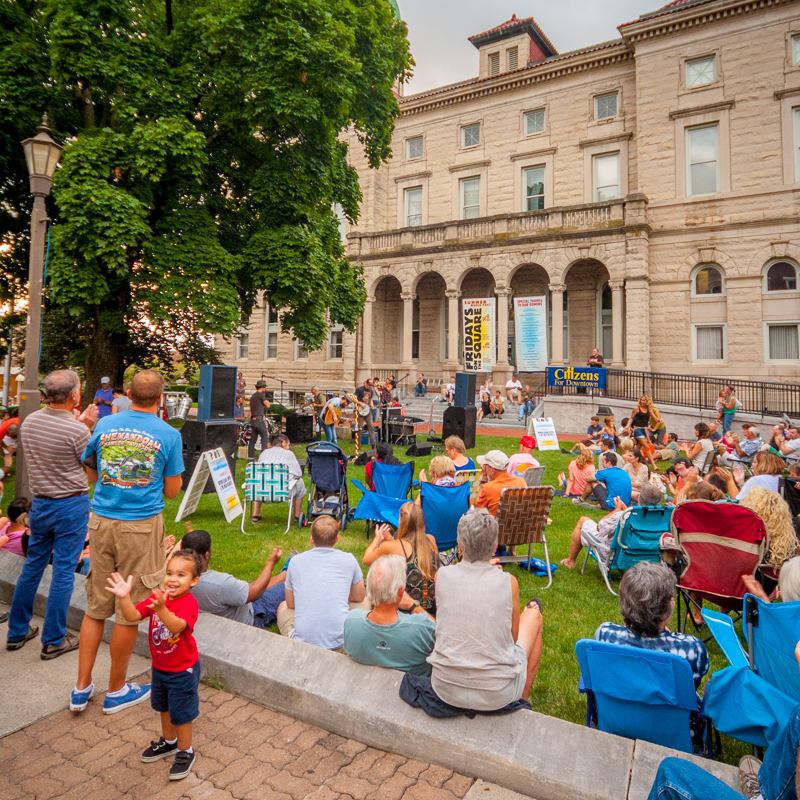 Jeremiah Jenkins, City of Harrisonburg Parks and Recreation, Arts Council of the Valley

HDR was founded in 2003 when community members asked the city to save their dying downtown. Our once-thriving county seat had become riddled with high vacancies and crumbling infrastructure when residents and businesses began moving away in the 1970s. HDR was tasked with reversing this decline. Community members helped us set a vision and plan that involved recruiting new businesses, finding new uses for old buildings, marketing the downtown, and producing festivals to bring people back. Today, our organization is a Designated Main Street America™ community that won a Great American Main Street Award in 2014 for demonstrating excellence in revitalization. We have moved beyond trying to stabilize a struggling community to implementing ideas that would have felt like a long shot 20 years ago. Our work today focuses on small business growth, beautification, destination marketing, and signature festivals. We produce several annual events that are free and open to the public, one of which is the Rocktown Beer & Music festival that attracts nationally touring talent and involves professional stage and sound production. Harrisonburg is a welcoming town that loves music. Our diverse community has 50+ languages spoken in the homes of our schools and we are a refugee resettlement community. We wish to blend our track record of producing high-quality events with our love of music and diversity.

Harrisonburg recently completed an extensive public engagement process around developing a 20-year plan for our downtown’s future. Repeatedly, people asked for more programming, especially programming that is intentional about diversity, and repeatedly asked for the return of a beloved summer concert series that ended in 2018. The people have spoken, and we have our marching orders. Launching a Levitt AMP Your Town series will help us meet this community need. For almost 40 years, a volunteer group called Citizens for Downtown hosted free concerts on our Court Square. “Fridays on the Square” got started because those volunteers remembered downtown Harrisonburg during its heyday and wanted to help restore its vitality. In the 1970s, downtown suffered a decline and people avoided the area. This series gave people a reason to come back and laid the groundwork for a formal revitalization effort. Fridays on the Square was born out of a love for downtown. It was more than just free, live music. It was an expression of love for the community and a source of pride. This is why people miss it so much. Live music is an important aspect of life in Harrisonburg. You’ll find weekly bluegrass jams carrying on the musical traditions of the Shenandoah Valley and families building community around hosting “house concerts” at their homes or farms. Many house concerts start with a potluck and end with amazing music, often by a traveling musician on their way to or from Washington, DC. We would like to model a new concert series after the spirit of the house concert and Fridays on the Square. We will create a space where everyone feels welcome, where children can run and play, and where community members can come together and enjoy a high-caliber performance in their very own downtown. It will remind them of Fridays on the Square, will foster community pride, and further strengthen the bond of our community and sense of belonging we strive for.

Over the years, downtown Harrisonburg experienced a regrettable loss of many historic buildings. Today, we have a downtown that is sprinkled with vacant lots and surface parking lots. We want to encourage our community to think differently about our underutilized spaces and reimagine our downtown with more parks, inviting public spaces, and new buildings where there are currently blank spaces. We’d like to enliven this grassy lot with a vibrant music series that does double duty to facilitate togetherness and joy, while also challenging the community to think bigger about our future and how we use our land. For several years, a group of volunteers formed a nonprofit to build a public park on this grassy lot. We believe that a three-year concert series will showcase a better use of this space and help people experience the space differently and provide a vision to increase advocacy for this future park. During the downtown master planning public engagement, the community asked for more programming and for us to bring people together more often. They expressed overwhelming support for more green space and improved public spaces. This series would meet all of those goals. The more we can show how activated public spaces and intentional programming can engage our community members, the more we can do in the future with permanent projects and sustainable, on-going programming. People just need to see it and experience it first to believe it!